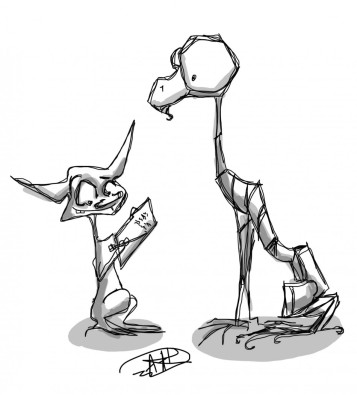 When Wallie heard about the Daily Prompt from the Daily Post—writing nonstop without thinking for ten minutes—he was naturally very excited. He thinks he is a better writer than he is and is always eager to show off.

The problem is, he only writes in Impish.

“Well,” I said, “there is only one way to solve it. You may speak and my Friend will write—as he speaks Impish—and I will sit here and watch you both and take photographs.”

“What’s the use of photographs?” my Friend wanted to know.

“So then I’ll be doing something,” I told him, “which is always better than nothing.”

This led to a great discussion about whether or not doing something really is better than nothing and whether nothing should qualify as something since it is an identifiable thing.

“Nothing is nothing,” said my Friend. “It’s the state of nothingness.”

“No, it’s something, because it’s the state of nothingness,” I said. “It’s a state.”

Then Wallie started talking about how he had been to the state of Nothingness once in the North-east-west of Somewhere and there really was nothing to recommend it. My Friend grew extremely upset and called him a liar and I got to feeling that I was at the mad, mad Tea Party in Alice in Wonderland.

I certainly wasn’t the Hatter.

“Well,” I said, “whether something is nothing or nothing is something or whatever, we still have to write something in ten minutes, so will the both of you stop acting like idiots?”

Wallie resented my use of the word “Idiot.” My Friend was too incensed to resent anything.

“Alright,” said my Friend, with a daring spark in his eye, “go on, Wallie. Write something. In Impish.”

“You’re supposed to translate,” I told him, patient as I could.

“That was then,” he said, “before this nonsense about Nothing got started.”

Wallie folded his arms and stuck out his tongue at him.

“Don’t be ridiculous,” I said, to both. “You just said yourself it was nonsense about Nothing! So let it go. Right? Yeah? Let’s write something.”

My Friend was not at all happy to let nothing go. So I guess that makes nothing something, after all.

I’m not telling him that.

Wallie went through this long and involved ritual of preparing himself to write. He cracked his knuckles, two to each hand, and jumped up and down on his toes. He took a deep breath and puffed.

He was waiting, but he was waiting like a vulture with an eye on his dying prey. And there was Wallie, puffing, and my Friend poised for murder, and honestly I couldn’t help it.

I started to laugh. That ruined everything.

2 thoughts on “Wallie the Imp in Ten Minutes”