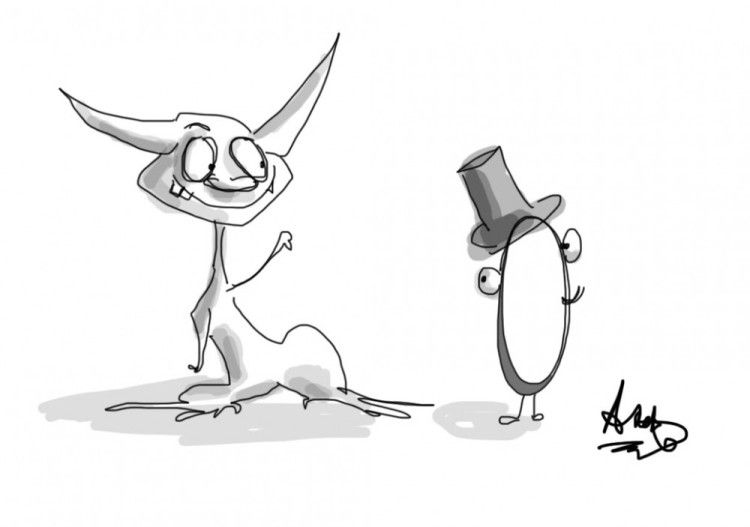 Wallie the Imp and a Respectable “O”

Wallie the Imp is confident I cannot write a paragraph or two without once using the letter “O.” It isn’t that I dislike “O” or wouldn’t want to use an “O” as a matter of course, for it is a very practical and altogether useful sort of letter—only, “O” was the first vowel to come to his mind. It reminded him of doughnuts and Imps are, as you may know, absolute devils for doughnuts.

I can never resist a challenge. So—“O”—, and without further ado—

Wallie is deathly afraid of Friday the Thirteenth.

Scary films aren’t the issue. Certainly he ducks under the bed when my Friend and I watch them, but generally he is a brave little spirit. At least that is what he wants us to believe.

The truth is, last Friday the Thirteenth was frightful rudish. Quite a few bad things happened all in the proverbial blink of an eye, and we were all of us, my Friend, Wallie, and I, taken aback by a series of events that must be described as “Bad.” There are adjectives more picturesque we might prefer, except they all will include that dastardly villain, “O.”

It was a week before Wallie reflected sine—Latin isn’t cheating and neither is punctua-what’s-it—sine despair, regarding that unlucky date. As I write, I despise Friday the Thirteenth’s excessively, because I see I have given myself a baffling exercise that is making my brain tingle and ache. That is perhaps a healthy sign. It means I am getting my exercise. Likewise it implies, I have had ENOUGH.

The letter “O” is by no means a necessary letter. We can certainly live without it, and I wish we would, because it is altogether too smug a Letter right now, being proved useful even on so contrary a day as Friday the Thirteenth. But despite my uncharitable feeling, I will give “O” the last word, or words, since the poor thing deserves it. There are fine examples of “O’s” worth in E. A. Poe’s writing, and what would poetry—any poetry—be without doughnuts?

Helen, thy beauty is to me

That gently, o’er a perfumed sea,

To his own native shore.

Thy hyacinth hair, thy classic face,

Thy Naiad airs have brought me home

To the glory that was Greece

And the grandeur that was Rome.

How statue-like I see thee stand!

The agate lamp, within thy hand,

Ah! Psyche, from the regions which