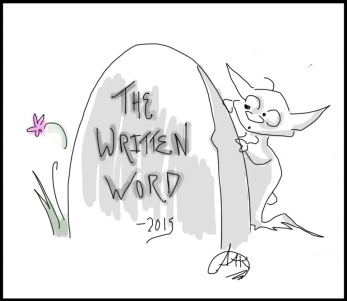 Wallie the Imp likes to read. In Impland, Imps admire books for their practical usefulness: you can read them, write in them, and chew on them. Wallie tells me that nothing tastes better than a nicely yellowed paperback.

When Wallie read the prompt for today’s challenge from the “Daily Post,” he was very excited about proving how expressible emotion is via the written word. Since he wouldn’t stop bothering me and wringing his ears about it, I promised him I would post something. It is after all, an interesting question: can the written word, expressionless, faceless, make you feel anything at all? Anything real? And where better to find out, than at a funeral?

At the funeral he was unsettled. That was the beginning of the fever. It wasn’t that he made a scene. His composure was thin, but it held, checked only by customary reserve and respect for the dead. But during the service he knelt while the others stood, and bent his head against his hands, and wept. Samantha knew he cried. But he was quiet, and she knelt down beside him, and was quiet, too. She knew that it was sad, what had happened, and she cried too, a little. But she was very young. She didn’t know about his pain, really. She was only beginning to learn it.

Mama Cleveland knew it. When the service was finished and it was time for the ceremonial motion of farewell, she bent down by her son-in-law, whom she loved as her own blood for loving her eldest daughter so well, and raised him carefully to his feet. When he realized, he started from the duty as if he were asked to do murder. A strange look came over him, half of defiance, half of utter agony. Mama Cleveland took the shovel and let the dirt fall on the coffin lid. Her motion, her steadiness, calmed Mr. Grey. He tried to follow her example. But at the last he seized and turned wildly to Reverend Matthews.

The reverend was surprised.

He murmured something about an “earthly shell.”

Reverend Matthews had recovered himself. He replied that the grief they acknowledged was an understanding not of an enduring loss, but of a temporary separation.

“We will all be reunited, whether on the Day of Judgment, or after death—in the after-life,” said the reverend. “But it is not wrong to grieve a loved one lost. We grieve here not in despair, but as we grieve at any sudden but definite parting.” Reverend Williams moved on impulse, and took the young husband’s hands in his own. “It is our greatest desire,” he said, “to go to Heaven. I daresay all of us would rather be there than here. And yet, for the sake of the ones who yet love us, and need us, here, we bear it till we’re called.”

Samantha listened. She wrapped her hands in Mama Cleveland’s skirt, and Mama Cleveland put her arm around her and held her, tight. Mr. Grey likewise listened to the reverend in silence. He looked down at the man’s hands gripping his own. If there had been anyone else in attendance, he might have been ashamed by his own outburst. But it was a lonely funeral and there was no one but his mother by marriage, his little sister by adoption, the gravedigger, and the good reverend.

He took the shovel and did as he must. Turning, he found himself gathered into Mama Cleveland’s firm, strong embrace. He yielded to it, and yielded his mind and heart as well. When he fell, silent and almost breathless, Mama Cleveland gave a piercing cry. The reverend knelt beside him. Earnestly, he listened for a pulse; he begged Mama Cleveland to be calm, only for the child’s sake, and guided the woman’s hand to her son’s wrist, pressing her thumb to the firm beat there.

“He is alive,” said the reverend, earnestly. “He has only fainted. For his sake, for the girl, be strong! At my home he will have every comfort till he recovers. My wife would never forgive me, if I left you on your own now. Do you understand? You are all to stay with me and Mary, until you are all recovered.”