Wallie the Imp has a lot of bad habits. 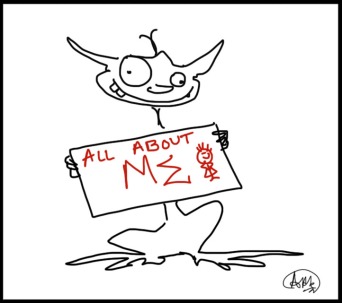 I have the world’s worst habit of writing romance when I should be doing serious work (like writing that serious paper due the day after tomorrow, whatever).

This is a pretty average sample of me at the library, working really, really hard.

And it was then, as her chin dropped on his breast and his fingers rested light on her shoulder, that she realized.

Aunt and Uncle were in the garden.  Mother was naming the flowers and Father was there too, smoking his clay. But here, in rare seclusion, sat Emily with Mr. Melridge. With neither chaperone to chide nor smile to shame, Miss Lawson felt quite free to do as she pleased, at her leisure.

You might suppose this meant something scandalous. It’s most natural. But that is not what happened. Rather, Emily closed her eyes and listened, as a child might, to the gentle beat of the man’s heart. He breathed, and she breathed, too. His quiet, contented sigh belonged to her, and his light hum trembled at her cheek as her own.

“O let the Summer soothe my soul, and bear me to thee, ’newed and whole,” said Melridge. And more softly, “You are not asleep, Emily?”

She rested her hand on the chest of his waistcoat. “No,” Emily said. “I’m not asleep. Though I will be if I am victor.”

“Then I will be silent, and give you the field.”

“Heaven?” He went very still. “No man can speak of that in truth.”

She smiled and tilted her head up. She could almost see the thin curve of jaw and chin from that angle.

He turned, his glance towards the window. Then she felt his eyes on her, not heavy but light, as a curious bird might look.

“I imagine it is like this,” Melridge said at last. “Only much better. The light upon our heads will be God’s own light, and the blooms we smell sweet as angel’s perfume. And now my vision fails me and I can only go by what my heart desires—what we are promised. Peace and good health, gentleness and love, a soft shade beneath the shadow of His wing. And you, with your head against me, just so. The voices of loved ones close by. That—that is all I know, of Heaven.”

Emily paused. She was not quite so tired as before.

“I am in your Heaven,” she observed.

“Why should I be in your Heaven?” she asked.

“It is not my Heaven,” he replied. “But I see what you ask. I—I cannot answer, except to say—I—I love you. I love you, Emily. I love your patient ways and tender soul. I—”

“Is this the fashion?” she asked. “To have a man confess his heart, and not bring himself to kneel?”

She did not speak unkindly. She meant only to tease. But she was a little astonished, perhaps frightened, and so her words came out harsher than they might. Melridge, not recognizing her playfulness, moved as one who is told that he is sitting on the silk of his hostess’s dress. He was intent on his subject, lost to a purpose that possessed his faculties. With only a moment’s hesitance he sank on his knee.

“Forgive me,” he said. “Would you consider—could you consider—binding yourself to a man like me? I have little money and my home is poor. I do not know when I shall publish next, or if I ever will again. And yet I have felt rich, and reassured, in your company. I know that I need none of what I strive for, as I need you beside me.”

He winced, bit his lip, and bowed his head.

Emily looked at him in silence. She stretched her hand, and lifted his chin.

“Why do you look as if you are in pain?” she asked, carefully.

“It is my leg,” he replied. “You know—I am afflicted with a particular illness. It is not always so sharp.”

The woman’s face whitened. “I forgot,” she whispered. “Oh, get up. Please get up. I can’t bear to see you kneeling there on my own stupid whim.”

“Let me have your answer first,” said he.

“I will give my answer when I will,” Emily replied. She pulled at his arm.

He rose and sat beside her. Her delay frightened him. But she took his hands and chaffed them between her own. Her expression was quiet, introspective; it was troublingly composed.

She raised her eyes. He was alarmed to see them so bright and full.

She put her arms around his neck and kissed him.

Perhaps they were rather scandalous after all.