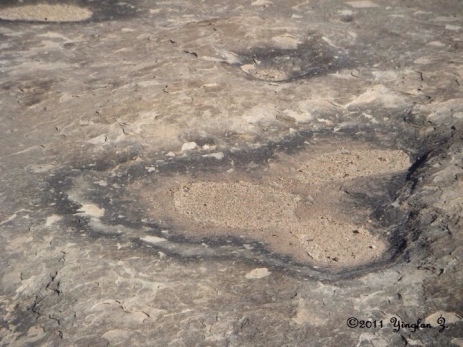 She only had an hour’s supply of oxygen left. Dr. Burroughs supposed she should be readying herself for the inevitable. She said a prayer and unbuckled an arm clasp she always wore on her missions.

“Come in?” she repeated. Somehow, she felt even more alone talking to that arm clasp than she had before.

Her eyes widened in surprise. The alien man looked stronger, freer than she remembered on Earth.

“No.” He shook his head, taking her hand. “I still owe you after what you did for me.”

He guided her to a rocky rise. Dr. Burroughs stared into the hidden opening his pressure revealed. It was impossible to tell if she was looking at a tunnel or a pit.

The alien looked at her curiously. “What?”

Written in response to the Daily Post’s Prompt, “Simplify,” and FFfAW’s challenge. Check it out! Photo (c) Yinglan.