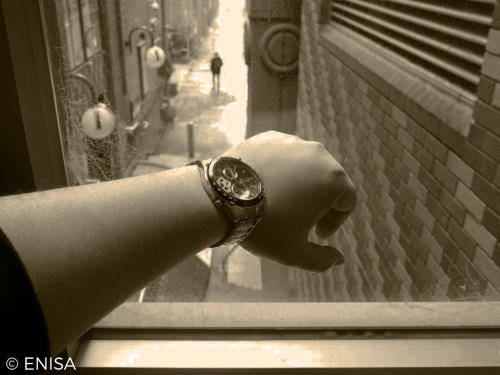 Anna ran back to the stairs and looked out the window. The Time Stopper was coming.

She turned around with a startled jump. When she saw who it was, she grabbed the elf by his shoulders.

“We have to hurry! Where were you?”

“There was a slight delay between your world and mine,” he said. “We can just make it.”

Again, up the stairs. There was the portal. Suddenly, the portal shimmered, wavered. In the blink of an eye it was gone.

Anna covered her face. “You idiot.”

She felt his hand on her arm. “Go, Anna. You can get away. The Time Stopper isn’t looking for you.”

She raised her head. Her eyes were wet but her hand on his arm was firm. “No,” she said. “If you’re ready for a fight, I am, too.”

Written in response to Flash Fiction for Aspiring Writers’ Photo Prompt. Check it out!

Wonderful story! I love how she wants to stay and fight the time stopper with him!

Wallie and I are glad you enjoyed! 🙂 🙂

I did! Tell Wallie you both did a good job!

Wallie and I thank you! 🙂