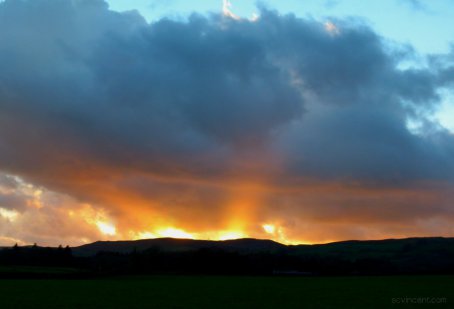 He had never eaten so earnestly, so desperately. Warm butter slid between his fingers and over his knuckles, and the juices oozed hot from the slab of meat, bathing the fresh baked loaf in rich steaming flavor. Sensation had left him save that of the delicious goodness in his mouth and the empty craving of his stomach. He sank his teeth into the feast before him and raising his eyes saw a young child, a yard or two distant, watching him. It was the baker’s boy.

The man felt a sudden thrill of terror and looked around him in the rising morning light, expecting the baker himself to find him even in this secluded yard and cleave his thieving head from his shoulders. But there was no one and, after a moment’s anxious pausing, Filip realized himself safe. He turned his gaze again on the boy and saw him with new eyes—saw the familiar, hungry glint in the child’s bright orbs, the starved thinness of his little frame.

Filip looked down at his loaf, swiftly getting colder. He took a small chunk in his teeth and swallowed. He was by no means full but neither was he hungry.

The boy crept forward a little. ‘No family,’ he said, looking at the loaf.

‘Then take it for yourself.’ Filip held out the appetizing morsel.

The boy looked at him with an interest almost adult. ‘You are not hungry?’

Filip tilted his head and laughed. ‘Well I am,’ he said, ‘but it’s a strange truth that the older one gets, the less one needs to eat.’

‘I never heard that.’

‘God forbid you learn it,’ said the man sincerely. His smile was bittersweet. ‘Take the food. You need it more than I.’

Written in response to Sue Vincent’s Thursday Photo Prompt. In a country of relative prosperity and freedom, it’s so easy to forget that scenes like this (and far, far worse) are the norm in more impoverished and war-torn places. I was shocked when I read an issue of Voice of the Martyrs, a magazine detailing the imprisonments and cruelties that face so many men and women even today. If you are interested, you can read about some of these cases at the site Prisoner Alert.

6 replies on “When You’re Older”

Thank you, Wallie and friend, for highlighting how much depseration and poverty remains beyond the experience of the majority of us in the online community.

Engaging composition from you, had me following….thanks for sharing.

You said a lot here.

I agree, you tell a lot here…