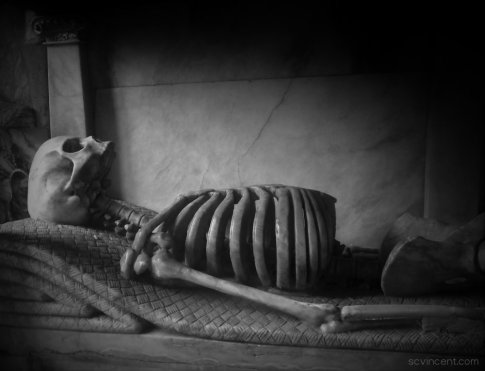 A silent, solemn figure to steal through the graves, his long cloak trailing in ebon folds as if he hurried night into the evening’s blue mists. Past the disconnected lines of wooden crosses he walked, mindless of the old and pausing in a moment’s fixed grief at the newer. His glance swept the cracked marble of aging stones but never for a moment did his purpose falter, and his direct progress led him straight to the gnarled cherry, shedding vibrant color in sharp spring wind.

Beneath the tree someone slept. So it seemed at first; closer examination proved this vision to be as lifeless as the rest, its seeming vitality a tribute to the skill of the artist who had carved the marble form of a young woman in repose. It was by this tomb that the man bent, leaning over the silent stonework, his fingertips tracing carved tresses that cascaded in a frozen, white stream about the rigid face, shoulders, and neck. His palm soothed an unyielding cheek and his warm tears turned to ice against the hard, unmoving lids beneath him.

He kissed a hard, dispassionate mouth with lips softer and more vulnerable. Gradually his weeping softened. He lifted his head, his breath catching on the chill air and his lashes heavy with sorrow, but he did not raise himself from embracing that apathetic figure. He adjusted the folds of his cloak until the garment partly covered the effigy, the fabric plentiful enough to offer them both relative shelter and still pool in inky blackness over the single stone step.

He again would have reverenced the woman’s motionless shape when the sudden sound of light footfalls startled him from his intent and brought him sharply to the present. He was not afraid of death if indeed some creature of the night desired him; nor was he eager to lose his life. He held the crucifix that hung from his neck, murmuring an earnest prayer for strength. At that moment, exhausted with anguish, he had none of his own.

It is impossible to describe the trauma that seized the man’s heart at that timid small voice. The wounds of lost love are deep, but a parent’s love scores with unparalleled savagery, having coupled with the former into the fierce and protective fire that a she-dragon might nurture for her only young.

In an instant the man stood, discovering the little girl half-hidden in the shadows. She was shaking visibly. Her small arms were wrapped ’round herself in an effort to keep warm and the man’s features tightened, his expression severe and bitterly incensed. If he still had yet to catch his breath he would not let the child realize the cause.

The child ran to him and clung to his leg, her cheek barely reaching his knee as she held him in a shuddering vice. The man gasped in surprise at her impulsive onslaught. Unclasping his cloak he bent and bundled her shivering form in the garment as best he could, his glance softening at the whimper that escaped her. Prizing her fingers from his calf, he sank carefully to the earth, his long hands firm and staying on the infant’s shoulders.

The girl’s face was swollen with crying. Even in the encroaching dimness her lids, nose, and cheeks were visibly inflamed, moisture glinting on her reddened skin. The man passed his fingers gently over her inflamed brow, then cupped her chin in one lean palm, stroking her wet and flushed cheek with his thumb.

“How long have you watched me?” he said.

The child looked at him, her brimming eyes luminous in the silver twilight. She had seen all. The words stuck fast in her throat and she reached out to him, her small hands holding his wrist.

The man was riveted. His gaze remained on her, steady and calm, but his face was dead white as the grave behind him. Her words shattered him surely as if he were glass. What a paradox it was that rough efforts had been vain in reviving him and stark reasoning useless, yet his child’s soft, impassioned plea rang on his soul, making poisoned wounds bleed fresh. The child was neglected, ignored, uncomforted; dizzied with sorrow the man had set her from himself without thought. It was a credit to his love for her that he recognized and acknowledged the failing now.

“Ellen,” he said, and released her. Her little face crumpled and his heart broke with it. “You are cold, foolish child. Come here; come here, my darling, please. I cannot bear to see—”

His voice broke, barely. He held out his arms.

With a sob, the child threw herself upon him.

Posted in response to Sue Vincent’s Thursday Photo Prompt. Check it out!

Wow! What a tremendous read!

Thank you so much!

This is a great response to Sue’s prompt. A really good story.

Thank you so much! It means a lot to Wallie and I that you enjoyed it.