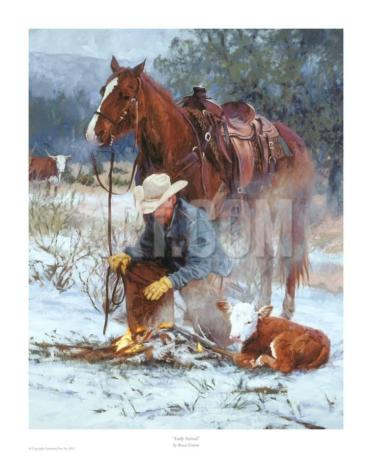 Big Nose would always remember that morning. It was bitter cold. But the calf was still alive. In the early light it rested there, not quite ready to stand, while Eddie kept the fire going. Big Nose kept close to the fire, too. Although the cold didn’t affect him badly, he was a smart horse and never said no to heat.

The calf was an unruly little thing, and its early birth could have been a disaster. But Eddie was patient as any mother. The cow herself was grazing, and while she fed Eddie kept her baby warm. There were better wranglers, flashier and younger men. But Eddie had been Big Nose’s rider for more than fifteen years, and after all that time Big Nose was prouder than ever to call him friend.

One thought on “Big Nose”