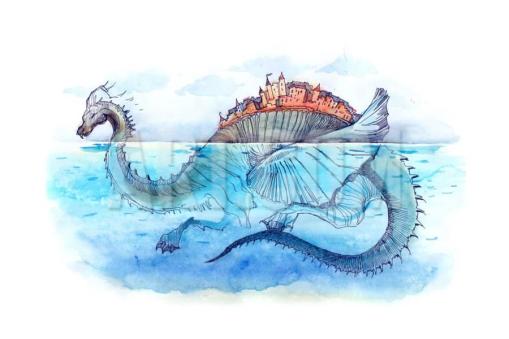 For more than fifty years, every morning at eight o’ clock, Erin O’Lay had taken the dinghy around to see the dragon’s head. For much more time than that the dragon had floated on the great deep of a blue ocean. The sun had not set for some time, and while the sun was shining the dragon was content to sleep in her warmth. But when the sun set, the dragon woke, and the dragon had been not a little offended to find a whole town on its back. That was when Erin O’Lay first went out with the dinghy.

It wasn’t a question of gold or treasures. It wasn’t about good conversation. But some dragons are tremendously fond of music, and Erin with his fiddle was just the one to strike a tune. So as long as he went out every morning at eight o’ clock, the town was safe.

The dragon blinked down at the two faces looking up at her.

“Where were you?” she asked.

“Dragon,” said Erin. “You must know how it is. You are my friend and it’s sure if seasons were still, I’d never leave you. But I am old.”

The dragon knew what he said was true. Erin’s hair, once rich and dark, gleamed with silver. Always a slight man, his smallness was now pitifully frail.

The dragon’s eyes went to the other passenger in the dinghy. The young girl’s eyes were as wide as saucers.

“My granddaughter,” said Erin. “When I am gone, she will play for you.”

The dragon did not answer him at once. Then slowly, she lowered her head. The man hesitated. He placed his hand on the creature’s enormous nose, her gentle breath enough to make the boat pitch.

“No,” said the dragon. “Your playing is enough for me. When you are gone I will mourn you. But it is not your music, Erin O’Lay, that has saved your people. It is your courage and your heart.”

Written in response to Okalinichenko’s beautiful painting, “Dragon.” Check it out and support the artist! Also submitted in response to Daily Addiction‘s prompt, “Quest.”