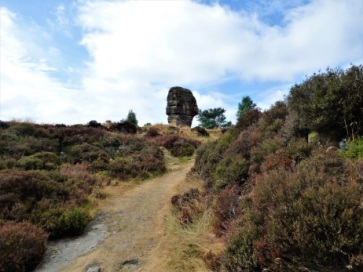 He woke through stillness and cold. That waking was precarious, and came and went, like a lazy tide. But at last, consciousness impressed itself on him. He opened his eyes to the world again.

Eddie breathed deep. The heavy motion almost made him cry out. His hand went instinctively to the bandage around his middle.

“I wouldn’t.” Wurther’s voice was low but firm. “You are still healing.”

Eddie looked around him almost wildly.

“Easy, easy. We don’t want you fainting again, so soon.”

The doctor hurried forward as Eddie struggled to rise, pressing the young man back on his pallet.

“Where is everyone? Colin—? Mix and Sarah—?”

“Half sick with worry for you,” said Wurther. “They are hunting spices for soup. We thought you would die. What are you? Selfish, spoiled. How dare you think of dying, when there are others who need you?”

Eddie turned his face to one side. The blue sky overhead, so starkly blue, hurt his eyes.

The doctor, unobserved, looked troubled and afraid. He did not like the way Eddie looked, awake but wholly apathetic, as if his body had woken and left his heart behind to dream. Wurther composed himself and turned Eddie to him once more, his fingers hard against the boy’s chin and cheek.

“Eddie,” he said. “Promise me you will never, never die.”

“Yes, yes. Silly Wurther.” The doctor shook his head. “Promise me you will not let your life go, as if it is no more than a burden, than a chore, a game. It is not a game. You cannot just say ‘Over’ and forget it. It is a dear, dear thing. It is dear to me, to Colin, Mix, Sarah. To all of us.”

Eddie looked at him and did not answer. His eyes glistened strangely.

Wurther released him. He smoothed the boy’s hair from his cool forehead.

“It is sometimes hard for me to remember that you are not a child anymore,” said the doctor. “You have grown so much, so fast. You know the best—the worst. That is what love is. It can be a curse, or a blessing. You cannot help its holding you. You must not let it destroy you.”

“Hush. No.” The old doctor rested his finger on Eddie’s lips. “Love does not destroy, unless you keep it and resent it, and make it a destroyer. It mends you. It supports you. It will never leave you. Ah, Eddie.” The tears had started at last, and spilled under the young man’s shuddering lashes. “My boy. My poor boy.”

Eddie tried again, to rise. This time the doctor let him. Wurther caught him in a fierce embrace. Eddie’s head turned on his shoulder and he wept, full, choking sobs catching harder than breath can manage. The old physician held him through it, and whispered a prayer against his messed hair. As if he were a troubled infant, Wurther rocked him carefully until his grief passed to something calmer, steadier, and the pain was less a heavy torment than a dull, throbbing ache.

Wurther loosed Eddie’s hold on him. He chaffed the young man’s cold fingers.

Eddie’s voice was raw, and soft.

“It will be easier, in time,” Wurther said.

The doctor leaned back from him.

“You can bear it,” he said, gripping Eddie’s shoulders. “You were made to bear it.”

“You were made to live.” Wurther looked earnestly into his face. “Pain is a part of living. The pain of loss, of separation, death. But you know as well as I, that is not the end. You are young, to suffer this, and it is hard. But your love was pure. It was true. If this world is agony, think what strange joys are yours; think what awaits you. Those who endure the cruelest pains in this life are surely afforded a rare and unimaginable beauty in the next that could never have been realized here. Your love has not passed. It is a living thing, love. I do not know if that comforts you.”

Eddie did not answer, but bent his head a little.

“You must rest,” said Wurther.

Eddie looked up at him. He was frightened, and strangely hopeful, and looked very like the child Wurther had first scolded and mended, those several years ago.

“It was no dream.” Eddie caught his arm. His hold was weak, and Wurther supported it.

“Emmeline is at rest,” said the doctor. “But I will not argue.”

“Could it be true?—could it? That she came to me in spirit…?”

“Perhaps. Do not let it excite you. Eddie? Do you hear me? Do not wait for her to come to you. It is you who will go to her one day, God willing, at the proper time. Don’t dream away your self, in longing.”

Eddie was only half-listening. He glanced to one side, and his lids drooped heavily.

“It frightens me, a little, that she should come,” said Eddie under his breath. “I want it, and it frightens me.”

“Quiet.” Wurther looked down at the long, slim fingers curled tight on his arm. “Why should you be afraid? If it is true, it is a gift. If it is madness, it is still a gift. Spirits, like fantasies, cannot harm you.”

Eddie roused a little. He clasped Wurther’s hand in both his own.

“I will be here when you wake,” said the doctor. “Where else would I go?”

Wurther leaned forward and kissed Eddie’s forehead. He remembered Colin’s little blessing. He did not speak it aloud, but in his heart it was the same.

“Thank God you are back, you dizzy scoundrel,” he said.

5 thoughts on “The Waking”