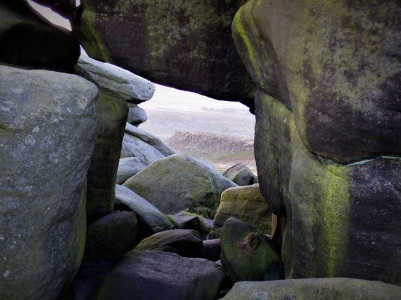 It was on a cliff of stone and ice where they met, the goblin chieftain and the human king. So the goblins called the cliff and the field itself Sang-Col, which in their tongue means “Blood-Call.”

The goblin chieftain was Scrape, known to her people as a fair but unyielding ruler. In the days before goblin lords and the self-named goblin king, a goblin chieftain recognized no path but their own, and Scrape acknowledged no master of her actions but herself and the God whom the goblins named Ovallen. For this reason, against the advice of her kin, she had seen the human king’s youngest son Patrick and dared to love him.

That the king would not accept a goblin into his house was plain. When he learned that his son had, against his wishes, met the goblin chieftain secretly, he placed the young man under immediate arrest. It was this arrest that had brought them both here, the goblin and king.

“You may see him,” said the king, “but only as one of our subjects. That his blood should be joined to yours is impossible.”

“You are old, king,” said the goblin, “and you will not keep your throne forever. I will not serve you and still I ask that you let your son be joined to me. If he is mine, I will offer you tribute and never fail to honor your throne.”

The human king’s face was dark. “You assume much, goblin. You assume that my son is willing to leave all that he has and go to you. Even if he is, do you think my eldest, who will take the throne after me, will allow it? It is an outrageous, incredible thing.”

Even as he spoke, the king was not so certain in his heart. He had seen how Patrick was when the goblin chieftain spoke to him, how the young man’s eyes were shadowed, soft as they followed her. When Patrick was arrested he had shown a fierceness and defiance that were remarkable in a man whose temper was usually humorous and kind.

When the king returned to his fortress, he spoke to his son in private. He told Patrick what the goblin had said and asked for his reply.

The young man met his father’s eyes. Scorn and anger was on the tip of his tongue, for he hated his imprisonment. But seeing how old the king looked, something in him yielded, and he spoke not to his king but to the parent who he admired.

“I love her, father,” he said. “Goblin she is, but our hearts are alike. She is strange, aye, but she is true; a bond between us will bring no dishonor to your name.”

The king listened to his son. And when the man had finished speaking, his father slew him with a dagger and had his body burned. There was and never could be, a binding of friendship between goblins and men.

When the goblin chieftain heard what had happened, she met the king once more. It was on that same cliff, above that same bare and empty field. The battle between their peoples was fierce and the king himself was slain, but the goblin did not pursue her victory to the human fortress. She and her people left that place and were not seen again by human eyes.

And so it remains to this day, the Sang-Col, and so it can still be seen by eyes that have never heard of goblins and never dreamed that such things may be true.