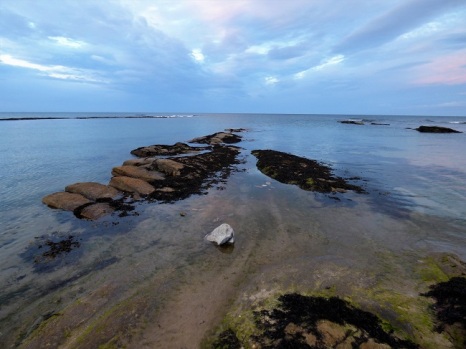 She stepped into the water. He rose to her, lifting from the deep, his long black hair clinging to his bare neck and shoulders. In the shallow water where she stood he turned on his back, unable to balance himself with the weight and length of his tail. His playfulness made Pat laugh. She knelt down and felt the warm water gather up to her chest. She reached out as Inith turned to go, and caught his hand.

The merman’s free arm braced in the sand. The fin at the back of his tail only just cleared the water. His eyes went to hers.

“Well, chi-uiris,” he said. “What are you going to do with me, now that you’ve caught me?”

Pat’s heart was pounding. It was the way he spoke, gentle and questioning, that made her almost afraid. She lifted his hand between them and brought it to her lips. The kiss she pressed there was soft, almost trembling. Her eyes closed at the first touch and taste of his skin.

Their palms pressed. The merman watched the young woman and felt the gentleness of her kiss. He was perfectly still, the light wind stirring the long wild strands of his hair. His black eyes took in the reverence of her motion.

Pat lowered Inith’s hand carefully in the water and let him go. In the silence between them they heard the low music of the sea. And then the merman lifted his head, and the slight motion of his tail brought them together. Their mouths met. The kiss was soft, tentative, as if expecting some recoil or reluctance. She tasted of strange spice and summer. And he was sweetness, salt, his own kind of velvet.

Their mouths moved together. Their bodies pressed. For an instant time was gentle around them and the sunlight seemed softer. Pat no longer knew what was done. She did not care what he was. But their movement and enchantment with each other brought them deeper into the water, and as he couldn’t swim easily their arms twined and they kept to the surface. They kissed, and laughed as they almost went under together with the newness and strangeness of what was done and known between them. She ducked playfully under the water and he followed her. To her surprise, he kissed her there in the blue depths.

Her eyes opened and her breath exhaled in large bubbles. She ducked out of his reach and escaped him, gliding to the surface with a practiced swimmer’s ease.

He broke the water’s surface not far from her. His motion was difficult. His clipped tail made it impossible for him to gain speed. As he neared, Pat backed water.

Pat couldn’t bear the sadness in his eyes. It was a game, a silly game. She hadn’t thought that it would cause him pain. She swam to him and took his face in her hands. He pressed her waist, steadying her.

“Aye you didn’t,” said the merman. His smile was faint. “You’ve caught a broken fish, chi-uiris. I am no good to land or sea.”

The woman shook her head. She picked the long hair from his cheek, and her awe at his closeness made her voice shake. “Stupid,” she said. “There is more to life than legs or fins. There is more to a fish than its tail. Kiss me. Tell me that you love me.”

Her fire stirred something within him. He kissed her deeply, and their passion saw him leaning back, her legs wrapping his waist. His long black hair spread on the deep, his cheek caressed by the water he loved so well, his brow soothed by the wind blowing in from the sea. His tail shone with the sunlight’s fiery radiance, dazzling in purple and sapphire. The touch of this young woman, of his lover, thrilled his heart and body as one. When he spoke, the confession was soft, breathed against her.

Pat’s brow furrowed. She heard the words like a spell. Again, she felt that icy chill.

His black eyes lifted to hers. “I love you, chi-uiris. If there is pain in this, it is pain we share together, as one.” He raised himself suddenly, upright as if he were a human treading water. His tail was still strong in spite of the injured fin. He unclasped the chain from around his neck. “Once,” he said, “you asked for this. I would not give it to you. You could have taken it that night. But you left it to me, and I have never forgotten that kindness. Now I give it to you. Take it, as you would my heart.”

Pat was silent. She stared down at the pearl he offered, its dark shine gleaming in his hands.

“I cannot take this,” she said.

“It belongs to you.”

The merman fastened the chain on her neck. “Now it belongs to you.”

Her lips quivered. The pain in her eyes was sharp. Inith tensed, alarmed and almost afraid. But the young woman leaned to him, her lips pressing softly on his brow. She held there with a silent blessing for this unusual creature, this being she dared hope was her own. No one had ever spoken to her with his gentleness. No one had ever offered her something so precious as this, or so vulnerable as their own heart.

“May the blessing of the Mover of Waters be on you, Inith, child of fin folk and kin to the water’s wildness. May this day be remembered between us and under Ovallen as the day I pledge more than friendship to you. I’ll take what you give me, but I will never sell it, never lose it for any favor but yours. You are more to me than all the treasures of this world.”

His eyes opened. He gazed at her, his dark eyes kindled, the wildness in them strange and tempting. “Do you take me, chi-uiris, for what I am?”

“Before the Mover of Waters,” he said, “I take you to myself. Though nature divides us, I take your heart, your life, in place of my own. You are myself, chi-uiris. I am joined to you as water is joined at the horizon, to the sky.”

Written in response to Sue Vincent’s Thursday Photo Prompt. Check it out! The beautiful photography is a perfect inspiration.

A beautiful romance…love wears many faces, but only one.