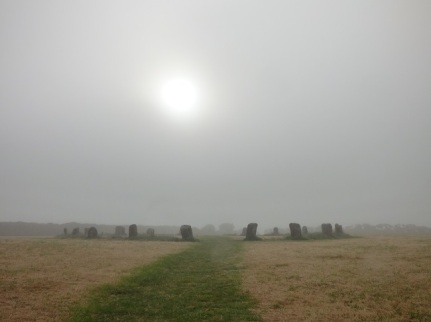 —Do you know what those stones are? Why, they could be anything. Sentinels over a sacred place, forgotten long before the world remembers to forget you. They could be the guardians of some terrible or great secret. Or perhaps—they are the standing graves of the chieftains who have gone before us, kings and queens rotting under the earth—

“Now you’re being morbid,” said Molls wearily. She sat down next to one of the stones, letting her back rest. “We’re never going to find my sister or the others, not in this mist.”

“Chik-chik,” said Sniffkin, “that’s as for as you know, mortal. It is only a question of sniffing and listening. We will find them soon enough.” He sat down though, as if he understood that soon was not immediately. After all, his feet were hurting like hers.

Molls listened to him rustling through their provisions for lunch. She picked at the dry cold grass.

“Well, that’s what you are,” said the fairy. “Isn’t it so? You yourself could make a stone someday.”

Sniffkin offered her a sandwich. “Chik-chik, I don’t know! I’ve seen several generations of my family go before me.”

“Aye, squirrels.” The fairy bit into his sandwich.

“Did you ever feel bad? The fairies giving you up as a baby for a little squirrel?”

Sniffkin cocked his eye at her. “As far as I know, fairies make terrible parents. So no, mortal, I don’t feel pinched about it at all.”

The question caught him off guard. He wasn’t sure why that question should be at all different from the others, but it was. It was.

The girl glanced at him and smiled, a strange smile that made him think that maybe, in spite of her being mortal, she understood. They continued to eat, and if they said no more there’s nothing much in that, except that the sandwiches were so good they couldn’t eat and talk at the same time.

Written in response to Sue Vincent’s Thursday Photo Prompt! Check it out for inspiration and wonderful photography!

3 thoughts on “Sniffkins and Sandwiches”